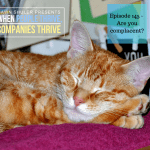 When you drive to the grocery store or somewhere you go to a lot, how much do you notice the people, cars, roads, and buildings around you? Or do you find yourself at your destination realizing you don’t remember getting there? You were on autopilot. It happens to all of us.  We get lulled into a sense of complacency, and we relax our protocols and necessary things we’ve put into place. Listen in as Dawn Shuler tells the story of Juno Kitty and her escape… and what that means for us in our working lives. Other podcast episodes referenced:  The
Read More 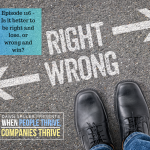 Years ago, my 4 1/2-year-old daughter, who was just learning checkers, was angry that she couldn’t make the move she wanted (because it was against checker rules).  Her father patiently explained the rules and pointed out that if she did the opposite of the move she wanted, she would actually win.  She got up from the checkers game, unfinished, and said she would prefer to be right and lose, rather than wrong and win. Listen in as I recount other examples in business where someone wanted to be right so much that it actually hurt them. Other podcast episodes referenced:
Read More

Episode 108 – Are your systems lacking? 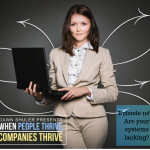 Systems are crucial for the strong running and longevity of any organization.  Another way to think of systems is the acronym – SYSTEM – Save Your Self Time Energy Money.  In today’s episode, Dawn Shuler shares different ways the need for systems to show up, and how having great systems sets an organization up for success and sustainability. Other podcast episodes referenced:  The top 5 books you must read, How you process the world, and Manage expectations.
Read More

Episode 99 – Are you playing the long game? 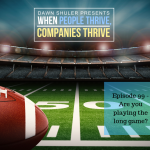 If you were asked this question, you probably answer, “Of course, I’m playing the long game!” but are you really?  How far ahead are you looking? Are you taking the easy way out? Are you paying attention to trends?  Are you adjusting your goals, objectives, and strategies? Listen in to today’s episode as Dawn Shuler discusses concrete examples of what you need to be considering in order to play the long game.
Read More 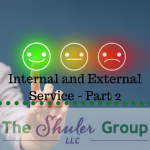 This is Part 2 of Internal and External Customer Service. In  Part 1, I challenged you to think about how you can up your game with your internal and external customer service. Even though one of our core values is extreme service (not just excellent service, but extreme service), I don’t want to become complacent and say, “We already do such a good job that we don’t really need to do anything to improve. Let’s just keep doing what we do. If we keep doing what we do, and our customers and clients are satisfied, where’s the harm in that?”
Read More 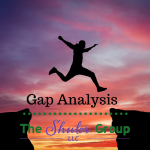 Much of what we do here at The Shuler Goup is finding holes and gaps, and then filling those holes and bridging those gaps. One of the exercises we take our clients through as well as something we do here in our own business, is what we call gap analysis. One method is to sit down and brainstorm with your team about certain factors or metrics. Let’s say, for example, revenue. First, you have to recognize (know) what your revenue is. Then you look at where you want it to be. Sometimes there’s a gap between those two numbers. You
Read More 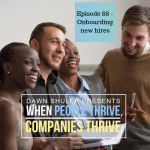 In the last episode, Dawn Shuler talked about the importance of a strong onboarding process for new customers.  In today’s episode, she continues the onboarding theme for new hires.  Here’s why it’s important: 37% of hiring decision makers say retention rates would increase significantly if new hires were better informed during the hiring process.  Listen in as Dawn goes over the 7 elements to consider in a strong onboarding process for new hires, as well as a sample first day for a new employee.
Read More 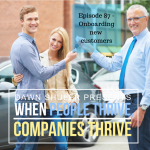 A customer is 4 times more likely to defect to a competitor if the problem is service-related than price- or product-related. With that in mind, customer service should be of paramount importance to for-profit companies and non-profit organizations alike. And the first step in a customer service journey is a new customer’s first experience. Listen in as Dawn Shuler talks about the elements and questions you need to consider to create a smooth, efficient onboarding process that results in happy (and returning) customers.
Read More

As Abraham Maslow once said, “If all you have is a hammer, then everything looks like a nail.” That’s the danger of single-facet thinking.  If you imagine an organization as a three-legged stool, what happens if you only focus and build one leg?  It falls over.  Listen in to today’s episode as Dawn Shuler illustrates the three legs needed and examples when an organization does not value all three.
Read More

Episode 67 – Build it for Mother’s Day 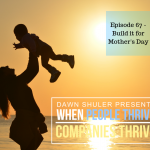 Back in the old telecom days, when they built the nationwide phone system, they built it for the extreme pressures of one day: Mother’s Day. Are you building your organization for Mother’s Day? Listen in to today’s episode to hear what you should be thinking about now and for the future.
Read More