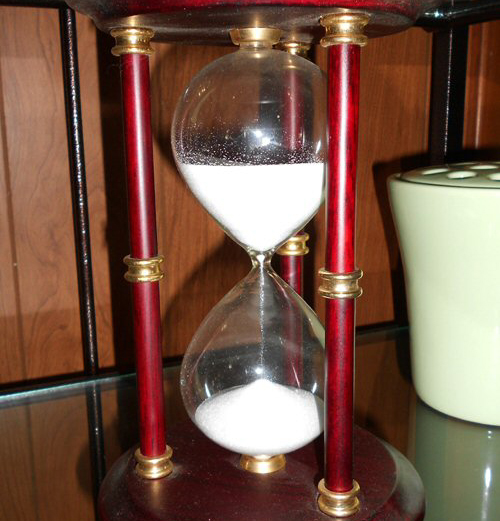 There are multitudes of chores, tasks, and “have to do’s” we dread having to do.  Most of us would happily throw out the whole delaying gratification thing if there would be no consequences.  There are a few people who are lucky enough to actually  enjoy certain things that would fall into the mundane and/or out of our comfort zone for most of us.

I am sure there is someone in the world who lives for cleaning, but for the rest of us we will most likely not be saying, “I wish I had done more cleaning” on our death beds.

Right up there with this one are “I wish I had been given more paperwork to do” or “I feel cheated because I would have liked to have just a few more car breakdowns on the road.” And “Why did everybody else have more computer crashes than me???!!!”

What do we do about all

of the less than sterling chores we all have to do?

Here are some examples of what I have done to help my chores along.

1. Hourglass – Some time ago I decided I can do mundane tasks if I know there is an ending point (whether finished or not). To do so meant that I would need a timer.  What I also realized is I need to be a bit more creative if I want to get mundane things done.  Thus the hourglass became functional, rather than just an nice relic sitting on a shelf.  And the visual made it much easier to get through the task at hand.

2. Beakers – Jump ahead a few years and there is another challenge I am faced with.  I am told that drinking 3 liters of water a day will improve all kinds of metabolic issues.  However, I seem to have a problem remembering to drink water, at least until I become thirsty.  I had to look at the best way for me to have a reminder, and I realized that, like the hourglass, a visual will influence me more.  With that in mind, I have decided to get 3 liter-size beakers from a chemical supply store because this will be a strong visual. Obviously when the beakers are empty at the end of the day, this is also a clear visual of a job completed.

So what does this mean for you?  I am guessing there are beakers and hourglasses in your life; they just come in another form. Dawn has stated many times she sees words and that the written word has more impact on her than visuals or audio.  And thus she does much better with charts and graphs 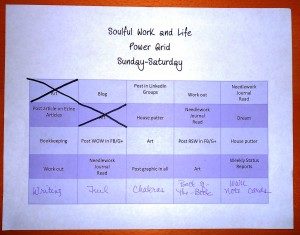 that have written tasks on them.  She can put big Xs over these written words when she completes the assignment.  Audio people may need music or inspirational spoken words to help them through the mundane project.

When you have discovered the most potent way you take in information, you can then experiment with ways to manifest this style in your life as a  motivator.