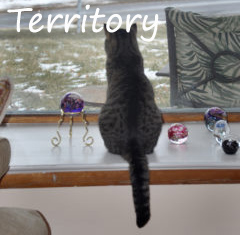 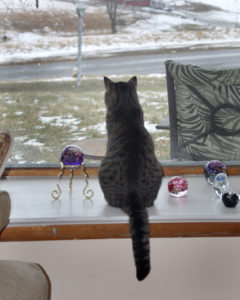 Observing my cat Kojo recently, I noticed his behavior has changed since he arrived two years ago. Back then, he would chase off any cats within his sight anywhere in the area.

This day, however, he saw a black cat walking rapidly along the other side of the street where we live.  He kept his eye on the cat, and did not pursue…. what had changed?

I say he had become much more confident about his home, and the boundaries of his territory.   Also, he was aware the other cat was on a mission and would soon be out of eyesight anyway, so why chase the black cat in the direction it was already going?

How does this relate to us?  Well, shocker of shockers: we are territorial also.   If we are at an event/workshop/social gathering, you can bet that most of us become aware of which people have occupations close to ours and/or have a similar appearance to ours.  Sometimes hackles go up and defense/offense mechanisms kick into play.

Recently Dawn was at an event where apparently the speaker felt threatened by Dawn’s mere presence as they were both in the same industry. Most likely, this person did not think through the fact that even if they were both business coaches, they still had different clientele.  The speaker made some invalidating statements towards Dawn, which could indicate there was some discomfort and insecurity.

Going back to the example of Kojo Kitty; he had obviously figured out where his territory ended and others’ began.  Apparently, some of us have gotten that memo, while others have not.

Any time we feel threatened by the mere existence of another is probably a good time to take a look at our fears and instincts to see where the perception of a threat is actually coming from.

We need to remember we are unique and that we have a unique brand, and also remember our job is to find our people, those who will resonate to what we have to offer and, more importantly, the way we offer it.